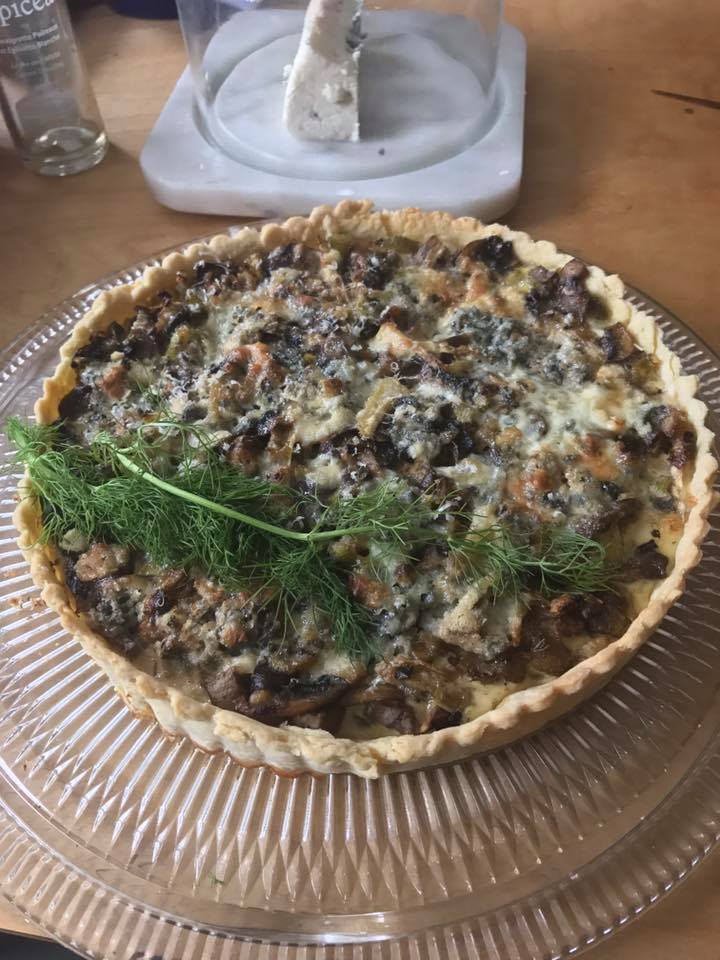 I was in the mood for a savory, vegetable tart. I’d made, in the past, a Stilton and fennel tart, but that wasn’t quite right. And I have an old Williams-Sonoma recipe for a mushroom galette, but that wasn’t quite right either. So, I thought I’d mix and match, which turned out to be a good idea. Usually, I’d make a rough puff pastry, but I found this recipe for a savory tart crust on Smitten Kitchen, and it was different enough from my usual crust that I gave it a whirl.  In the end, the tart is a rich, savory, fulfilling main course.

9″ two-piece tart pan. Line the bottom with a round of parchment cut to fit.

If you’re using a Store-bought crust, preheat the oven to 350 degrees, gently place the crust in the tart pan, pressing it down into the edge, trim, then chill for 30 minutes. Place the pan on a cookie sheet, line the crust with foil, fill with beans or pie weights and bake for 20 minutes. Remove the foil and weights, return the crust and bake for another 5-7 minutes, until the crust is light golden. Remove to a cooling rack.

If you’re making a crust from scratch, it doesn’t need to be blind baked. assemble the crust, line the tart pan, and tuck the crust in the fridge while you work on the filling.

Beat the eggs and milk together until combined.

Take the tart crust from the fridge. Spread the filling evenly over the crust, pressing it gently flat but not compacting it. Crumble the Roquefort and scatter it over the mushrooms. Take the egg-milk mixture and pour evenly over the filling, top with the Parmesan cheese, and another few grinds of pepper.

Bake at 350 until well browned and fragrant, 30 minutes.  Remove to a cooling rack and cool until just lukewarm. Remove the tart from the tart pan, serve warm.

I had one sweet potato kicking around the pantry. I could have simply roasted it and eaten it, but, instead, decided to chase down a sweet potato roll recipe. The original is here, but I made some alterations, cutting out sugar and altering the glaze a bit. These look funny, since I cooked them in a cast iron frying pan. If you want nice looking, even rolls, cook them in a 9 x 13 baking pan.

Mix the water, milk, sugar, and yeast in a large bowl let proof until frothy, 10 minutes or so. Add in the eggs and beat, then add the salt, butter, and rosemary, beat again. Add in the sweet potato and beat until well mixed. Add two cups of flour and mix until incorporated. Add two more cups and mix until incorporated. If you’re doing this by hand, you will, at this point, have to abandon your spoon and get your hands dirty, kneading the flour in. If the dough feels slack or sticky, gradually add the remaining flour. Otherwise, turn the dough out onto a lightly floured surface and knead until the dough feels smooth and slightly tacky, about ten minutes. Place in a covered container and let rise until doubled in size, roughly an hour.

Turn the dough out onto a lightly floured surface and divide into 16 equal pieces. Shape your rolls and place them in a parchment-lined 9 x 13″ baking pan (you can oil it lightly, but I found this unnecessary). Cover the pan and let the rolls rise again, 45 minutes or so. Preheat the oven to 350 degrees.

Make the glaze: Stir the butter, honey, and rosemary together. Brush the tops of the rolls with the glaze. Bake for 20 to 25 minutes, until the tops are browned. Remove from the oven and brush once again with the glaze, scatter coarse sea salt over the rolls. Serve warm. 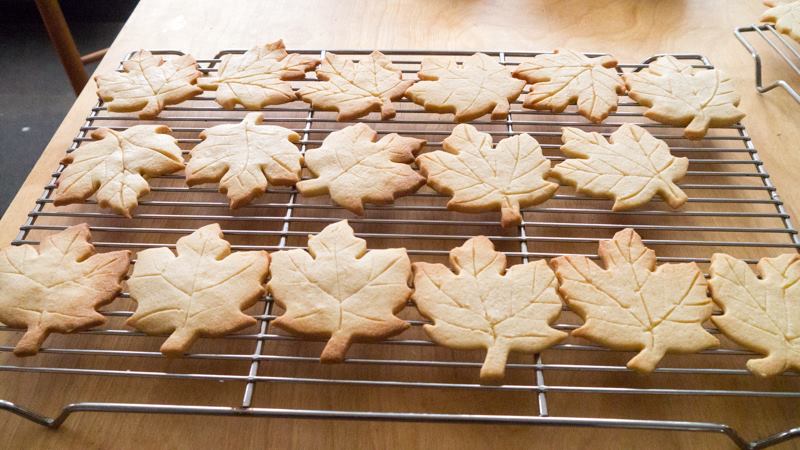 Sugaring season starts in mid-February in Vermont, and lasts until the trees bud. Showing up with a plate of these maple shortbread cookies to a “Sugar on Snow” dinner isn’t a bad idea. The maple isn’t overpowering, and the cookies aren’t overly sweet. If you don’t want to bother rolling them out and using a cookie cutter, you can always form the dough into a log, chill it, and slice rounds. But, really, making maple-leaf shaped cookies is half the fun.

In a stand mixer, beat the butter until it is light and airy. Add the sugar, beat until incorporated, then add the syrup and egg yolk. With the mixer on low, gradually add the flour, mixing until the dough is just combined. Shape the dough into a ball, wrap it in plastic wrap, and refrigerate it for at least an hour (overnight is better).

Preheat oven to 350 degrees and line two cookie sheets with parchment. Divide the dough in half, keeping one half in the fridge. Roll the other half out to 1/8″ thick, and cut with a cookie cutter. Save the dough scraps, put them back in the fridge as you roll out and cut the second half of the dough. Continue rolling and cutting until the scraps are all used up. Bake at 350 degrees for 12-15 minutes, until the edges are slightly browned (the cookies may look undercooked in the middle, this is fine. They’ll firm up on the cooling rack). Depending on the size of your cookie cutter, this will make approximately 24 cookies.